Natsuyuki Rendezvous was simulcast aired and was simulcast by Crunchyroll in 2012, and it’s a shame I didn’t get around to watching it until now. This anime is not your typical romance, geared towards an older audience and dealing mostly with how people process grief over the loss of a loved one. Strong animation and vibrant colors help bring out the show’s emphasis on nature, flowers, and the individual characters that are the life of this anime. Packed with drama, grief, and the discovery of new love, Natsuyuki Rendezvous gives us a show that can be deeply introspective while crafting a tale of the process of moving on after death from both sides of the veil.

If you haven’t had the chance to check it out yet, here’s a quick synopsis:

After falling in love with the owner of a flower shop near his apartment, Hazuki decides to take up a part-time job there. But as he grows closer to Rokka, his manager, details about her past begin to be uncovered particularly when the ghost of her dead husband appears. It just so happens that Rokka’s ex-husband died at a young age due to cancer but still cannot let go of their relationship. As Hazuki tries to do his best to persuade Rokka to go on a date with him, her husbands lingering ghost does his best to get in their way.

END_OF_DOCUMENT_TOKEN_TO_BE_REPLACED

This will be a short one today mostly because the comic I’m going to talk about is a short-format gag strip that was compiled into a few volumes of its own. Tsurezure Children started as a web 4-koma comic created by Toshiya Wakabayashi. Four-koma comics typically focus on gags and are typically arranged in four panels reading top to bottom or two columns of panels side-by-side. This comic was eventually picked up by Kodansha’s Bessatsu Shonen Magazine and then transferred to Weekly Shonen Magazine. It came to my attention a short while ago when an announcement was made that it was going to get an anime adaptation in the Summer season of this year. It seemed interesting enough, a simple comic that focuses on young high school kids having trouble confessing or talking about their feelings, and it very quickly made me glad I picked it up.

END_OF_DOCUMENT_TOKEN_TO_BE_REPLACED

I’ve Always Liked You is an hour-long film that appeared on the Crunchyroll simulcast list last season. I was meaning to watch it then, started watching a bit of it, but wound up only finishing it this week. The film is based on a Vocaloid song produced by Honey Works but manages to combine their music and the films plot in such a way that it wasn’t that obvious until the end. With some of their other music interspersed throughout, this anime presents a story about three different couples, each learning about love in their own way whether it be questions about what it means to date, fears about losing a good friend, or what it means to actually be in love. The whole move comes off as a sweet but pretty standard shoujo romance.

Here’s a brief synopsis to get you started:

The movie begins with Natsuki confessing her love for her childhood friend Yuu, but then chickening out and claiming that it was merely practice for her real confession. Yuu eventually agrees to help her practice her confessions, all the while wondering if he can really support her in the end. The next couple is Mio and Haruki, who are close friends bordering on boyfriend and girlfriend. Mio is also having trouble confessing her feelings, wondering what would change if they became boyfriend and girlfriend. While Haruki seems nonchalant about the whole thing, he too is wondering if they should take the next step in their relationship. The last relationship is between Akari and Mochizuki. Mochizuki has always admired Akari from afar, but never had the courage to confess let alone talk to her. Akari is someone who has never fallen in love, but when Mochizuki finally gets up the courage to talk to her, will that change?

END_OF_DOCUMENT_TOKEN_TO_BE_REPLACED 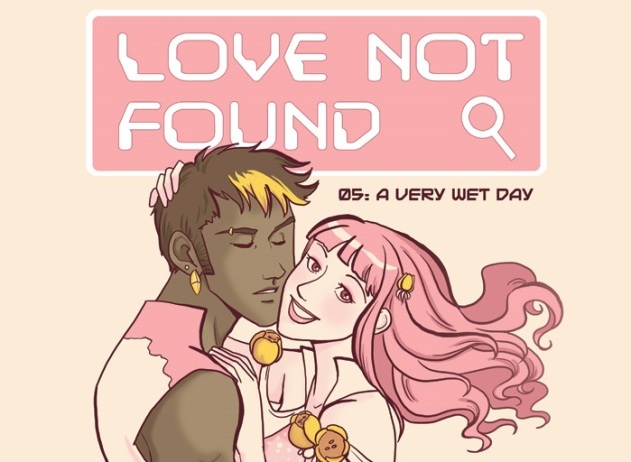 I wanted to step away from the print arena for a little while to talk about a webcomic I recently came across called Love Not Found, created by writer and artist Gina Biggs. I’m always looking for new stories and comics to explore, and webcomics provide a way for new and experienced creators to tell the stories they want to tell. Love Not Found is a comic that may show a slightly amateurish art style, but it makes up for it for the story it weaves full of futuristic technology and the re-discovery of love. I was hesitant to read it at first, as I can be picky about art styles, but the unique world she brings to life kept me coming back for more.

To give an idea what this comic is about, here’s a quick synopsis:

In the years following the decline of Earth, much of its past inhabitants looked to the stars for their new homes, venturing to new planets and ecosystems to reap out a new living. But as they journeyed the galaxy and technology increased, the need for human contact diminished. Much of the human population gets their pleasure through personalized machines and sees human touch of any kind as revolting. It is in this time that Abeille decides to move from her planet of perpetual winter to one filled with lush, yet alien, greenery. She brings with her one desire, to build a garden in memory of her deceased sister. But that dream quickly becomes eclipsed by another: to feel what it’s like to be touched by another human being.